The setup should be validated by performing a total runout scan on the rotary stage with no target present.  The stage should be cleaned with Isopropyl alcohol and allowed to dry prior to the scan. This reduces any dust or dirt accumulation which will give a false reading of runout.

A 360-degree runout of the rotary table, without camera shield in place is presented above. Note that the noisy sections of the plot are when the stage was being rotated. You can see when the rotation is stopped the readings are very low and stable. Note the second revolution produced a slightly different runout.

. Pk-pk runout uncertainty is about +/- 5um. The noise seen is due to the surface finish of the stage affecting the laser power.

The shield was placed on a rotary stage mounted on an optical bench after being cleaned with Isopropyl Alcohol to remove any dust or debris.

Measurements were made in the four corners of the shield.  The degree of rotation of the rotary stage was noted. Before all measurements were started the laser head was zeroed (180° position was start) so only relative measurements were taken. The degree of rotation was chosen such that the laser spot was not in a hole, on a piece sticking up or off the shield. It should be noted that the rotary stage did have some runout and it was not exactly repeatable from rotation to rotation. This is probably due to non-repetitive bearing runout. 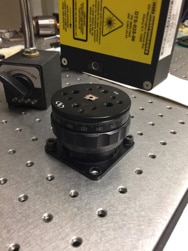 The camera shield was centered on the rotary stage and the laser was offset such that the laser would hit all 4 corners as the stage was rotated. The degree of rotation was noted so it could be repeated. 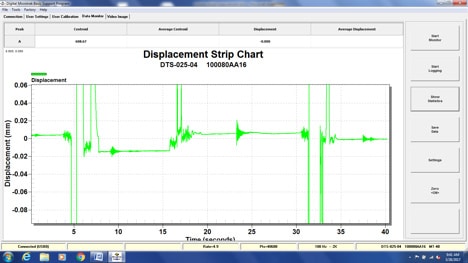 Example of the 2nd camera shield being measured. Locations where stage rotation was stopped and measurements were taken. The big spikes are where the laser spot was off the shield, in a hole or while running across a vertical surface sticking up.

Very high resolution was observed; the shields appear very flat. The customer should be aware that any equipment setup will need to account for measurement stage run out as it can significantly affect the results. The rotary stage used in this experiment could have up to 5 um run out, but during subsequent testing, it was around 2-3 µm.

When you need to verify flatness MTI Instruments has you covered, call our applications engineers to learn how we can level your field.