How to Measure Dielectric Separator Thickness in EV Batteries

Capacitance Did You Know, Instruments News| 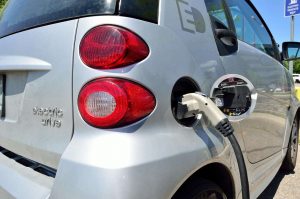 The International Energy Agency predicts that as many as 125 million electric vehicles (EVs) will be on the road by 2030. At the heart of these electric cars, trucks, and buses is the lithium-ion (Li-ion) battery, a type of rechargeable battery with high energy density and low self-discharge. The plates in Li-ion batteries consist of lithium compounds that are applied to either a copper plate substrate (cathode) or an aluminum substrate (anode). In turn, these two plates are separated by a dielectric separator.

All of the layers in an EV battery are extremely thin. In fact, the cathode and anode plates are approximately 100 to 200 µm thick. The dielectric separator is also extremely thin, but it’s made from relatively inexpensive materials like polyethylene. By contrast, the cathode with its specialized construction is relatively expensive. Regardless, EV batteries comprise a significant portion of total EV cost, roughly 40% of the price of a 2018 Tesla Model 3 according to one source.

From Costs to Capacitance 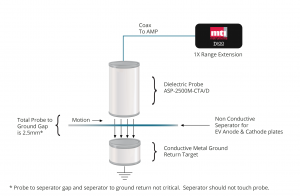 In addition to the thickness of each plate, EV battery manufacturers require a high degree of accuracy. Today, the tolerance for a cathode plate or an anode plate is less than 10 microns. Yet manufacturers are now seeking accuracies of 1 micron. They’re also demanding greater precision for thickness measurements of the dielectric separator. Yet traditional methods of gauging can’t measure extremely thin EV battery plates and achieve the precision that’s required.

Fortunately, capacitance thickness gauging provides the solution. In basic terms, the electrical capacitance that’s formed between a capacitance probe and a target surface varies as a function of the distance (gap) between these two surfaces. Capacitive displacement sensors are known for precise measurements of electrically conductive materials but can also provide accurate thickness measurements of thin, non-conductive materials such as glass, sapphire, plastic, and polymers such as polyethylene for dielectric separators.

With the Digital Accumeasure, there are two ways to measure the thickness of battery plates (films)  in EV batteries. The first method uses two single-ended probes if the substrate can be grounded and two push-pull probes if it cannot. The second method positions the battery plate/film on a roller and two probes are positioned to measure the film step height. An MTI application note, Two Ways to Measure Battery Plate Thickness, describes both methods.

MTI Instruments of Albany, New York (USA) provides capacitance-based precision measurement solutions to the EV battery industry. Visit our website for more information and contact us with questions about the capacitance-based technologies described in this article.