Home/Capacitance Did You Know, Instruments News/Measure Wafer Bow, Warp and TTV with Capacitance

Capacitance Did You Know, Instruments News|

The flatness of silicon wafers used to manufacture integrated circuits is controlled to tight tolerances to help ensure that the whole wafer is sufficiently flat for lithographic processing. To ensure your wafer manufacturing process is within tolerance, you need to measure the wafers being produced. Various measurement techniques exist to verify process tolerances and eliminate expensive scrap wafers.

Proforma technology has a wide wafer thickness measurement range and provides excellent repeatability. It is ideal for measurements of Silicon and other semiconductor materials.

Capacitance sensing can be used to measure wafer thickness, bow, warp, and total thickness variation (TTV) as represented in Fig 1. Capacitance probes use low voltage electric fields to measure the distance from the probe to the wafer. 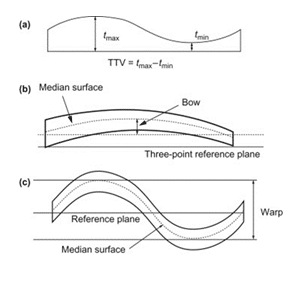 The wafer is located between two probes. The distance between these probes “G” is accurately known, and the gap “A” and “B” between the wafer and the probes is obtained from the capacitance at each measurement point. In Figure 2 below, the Proforma 300iSA semi-automated metrology system is on the left and the Proforma 300i manual semiconductor metrology system is on the right. When the tool is automated, the wafer shape is characterized with non-contact capacitive scanners, which can measure the thickness and shape of the rotating wafer.

Additionally, MTI’s Digital Accumeasure Gen 3 capacitance amplifier and capacitance probes can be used to build custom OEM wafer metrology systems. The SDK and Amplifier take a lot of the hard work out of building an OEM system.

ASTM standards provide the definitions for specific wafer characteristics. MTI’s application note contains these definitions, includes calculations, and explains how its capacitance-based technologies work. The first two sections explain how to measure thickness, TTV, bow and warp between two capacitance-probes. The third section is specifically for the solar industry. It describes the difference between bow and warp and explains two ways to construct a reference plane for warp measurements.

Read the application note on how to use capacitance to measure wafer bow and warp.