This guide from MTI Instruments explains what you need to know about using electrical capacitance for measurement in industrial applications, including advanced manufacturing.

Capacitance is the ratio of the change in an electric charge to the corresponding change in its electrical potential (i.e., voltage). Capacitors, components that that have the “capacity” to store an electric charge, consist of conductive parallel plates that don’t touch or connect with each other. Instead, these metal plates are electrically-separated by air or a layer of insulating material (i.e., the dielectric).

MTI’s technology is based on the principles of parallel plate capacitor measurement and uses a probe as one of the plates and a grounded target as the other. The electrical capacitance that’s formed between the probe and the target varies as a function of the distance (gap) between these two surfaces. An amplifier converts the capacitance of the gap into an output voltage that’s proportional to the gap.

Because capacitance doesn’t require physical contact between the sensor and the target, there’s no mechanical loading, probe or target wear, or target distortion. Capacitive probes also cost significantly less than laser interferometers while matching or exceeding them in terms of stability, precision and resolution.

Importantly, capacitive probes provide reliable performance in extreme environments. For example, they can withstand temperatures as high as 1200°F (650°C) and as low as 4°K (-269.15°C). Capacitive probes also work in very strong magnetic fields (2 Tesla) and operate under vacuum conditions (10-7 Torr). They withstand humidity, too.

Now that you know some basics, it’s time to examine uses and applications. You’ll also benefit by reading MTI’s case studies from different industries. Before using capacitance for your own application, however, you need to account for design considerations. Comparing the capacitance measurement systems that are available from MTI Instruments can also support your efforts. 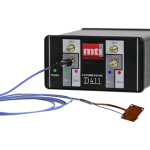 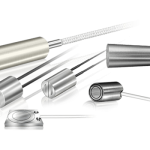 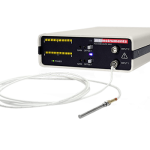 Capacitance is used in a variety of industrial applications. Examples include measuring position and vibration. Whether you need capacitance for standard or advanced uses, you’ll benefit from its accuracy and reliability.

Before using capacitance with your application, you’ll need to ask and answer a series of questions:

This is just some of what you’ll need to know. That’s why it’s important to choose the right partner, too.

Capacitance is used in industries ranging from aircraft maintenance to tire manufacturing. As the following case studies explain, capacitance is also used in consumer electronics and semiconductor manufacturing, wind and solar power, industrial processing, and in the automotive industry.

The power generators for wind turbines need an optimal gap to ensure peak efficiency. They also need a gap measurement solution that withstands harsh environments and magnetic fields. Corrosion-resistant capacitance probes made of non-magnetic materials are durable and highly-precise. They integrate with digital amplifiers and support the use of custom cables that prevent magnetically-induced currents.

Brake rotors are now thinner and lighter, but they’re still exposed to conditions that can cause distortion or failure. That’s why the automotive industry needs continuous data collection during testing. Multi-channel measurement systems that withstand high temperatures and provide 24-bit digital readings eliminate errors from analog filtering, linearization, range extension, and the summing of channels.

Water-in-oil contamination can reduce the life of industrial lubricants and increase the cost and frequency of repairs. In-line capacitance probes support a proactive approach to maintenance and, when used with a digital amplifier, can trigger a CPU alarm if the dielectric field reading for an oil flow channel differs from the reading for a sealed oil sample. Monitoring is both continuous and automatic.

For additional information about capacitance, visit these resources on the Web.

Here are some of the latest stories on our blog about capacitive technologies for precision measurement.
Steve Melito2019-08-09T08:23:15-04:00

Capacitance probes are non-contact measurement devices with a capacitance sensor inside a protective shell or housing. They use cables and connectors to integrate with amplifiers and are an important part of capacitance measurement systems. [...]

Capacitance sensors are precision measurement tools for process automation, quality control, and tool automation control. They’re used in a many different industries and are suitable for virtually any application where accuracy is paramount. There’s a [...]

How to Implement a Complete Digital Closed Loop Control System

Dive straight into the feedback!Login below and you can start commenting using your own user instantly