The Fotonic Sensor™ is a non-contact instrument, which uses the fiber optics lever principle to perform displacement measurement, vibration analysis and surface-condition measurements. The Fotonic Sensor transmits a beam of light through a flexible fiber-optic probe, receives light reflected from a target surface, and converts this light into an electrical signal proportional to the distance between the probe tip and the target being measured. A simplified example of the fiber optic principal is shown in Figure 2. The output signal voltage from the fiber optic sensor is then used to determine position, displacement, vibration amplitude, frequency and waveshape of a target surface. 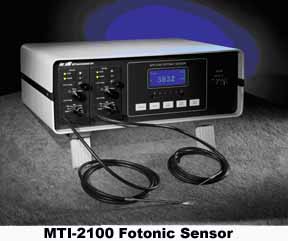 The MTI-2100 features advanced fiber-optic and electronic technologies for precise measurements of displacement, position and vibration. It sets new performance standards with resolution up to 0.01 µin. (2.5 Angstroms) and frequency response from direct-coupled (dc) up to 500 kHz.

If you plot a curve of the voltage output (proportional to the light intensity received) verses the distance between the target and the fiber optic sensor you will find that the relationship is very sensitive when the probe is close to the target. This highly sensitive area is called the front slope of the performance curve (Figure 5), typical values as listed as Range 1 in Table 1.

Increasing the distance further causes the illuminated area (A) in Figure 4 to enlarge, increasing the amount of reflected light seen by the receiving fibers (B2). Eventually, area B2 becomes saturated indicating that the fibers are accepting the maximum amount of light possible. At this point, the MTI-2100 Fotonic Sensor generates the maximum voltage output. This apex is called the optical peak. The displacement range over which the initial voltage rises and where the maximum output occurs is a function of the probe diameter and numerical aperture (N.A.) of the fibers, not the surface reflectivity.

Adjusting the amplitude of the optical peak provides the output sensitivity required for inspection and comparison of surface conditions. It is also used to calibrate each fiber optic probe to duplicate the sensitivity factors established at MTII. Figure 6 shows three different reflective surfaces.

Curve A: Instrument response curve if target reflectance is high.

Note that the optical peak occurs at the same operating distance for each of the three samples. By adjusting the amplitude of this peak to match the amplitude set at MTII during the calibration process (Curve B) the front slope and back slopes can be replicated. This slope, or sensitivity value, is stored in the memory of the MTI-2100 plug in module and used to convert voltage to a displacement or position. The MTI-2100 has a calibration process that allows you to duplicate this curve and “self calibrate” to your specific target reflectivity. If the target reflectance is either too high (Curve A) or too low (Curve C), compared to the calibrated curve (B), the user simply adjusts the transmitted light intensity by pushing the “cal” button.

Further target movement away from the probe causes a loss of reflected light intensity seen by the receiving fiber (B2) in Figure 4 and produces a decrease in the voltage output. This area of the curve is called the back slope region (Figure 5), typical values as listed as Range 2 in Table 1. Each plug-in module stores the sensitivity factor of the front and back slope providing two distinct operating regions per fiber optic sensor. One highly sensitive area with a small standoff and measurement range and another less sensitive area with a larger standoff and measurement range.

The Fotonic Sensor can also operate at greater standoff distances through the use of MTII’s KD-LS-1A Optical Extender2 (Figure 7). This focuses the light from the fiber optic probe to a point about 0.32 inches (8mm) beyond the front of the most forward lens.

When the distance from the front of the KD-LS-1A to the reflecting target is approximately the same as the focal length of the lens assembly, an image of the probe face will appear on the surface of the reflective target. This image is transmitted back through the KD-LS-1A and is reimaged onto the fiber optic probe face. This causes the returning light to enter the transmitting fibers and significantly reduces the light projected onto the receiving fibers. The decrease in light creates a sharp null in the instrument’s output signal as seen in Figure 8.

When the target distance is displaced slightly in either direction from the focal point, the image is blurred and the returning light begins to enter the receive fibers again. This action generates a peak in output signal at either side of the null. The displacement/output relationship will be similar to that which would have been obtained with the same probe looking directly at the reflective surface –except that the standoff distance is now on the order of 100 times greater than before. Other models of the Optical Extender can incorporate a magnification factor to obtain even greater sensitivity while still retaining the advantage of increased operating gap.