Powerful Ways the Portable 1510A Can Be Used In The Field

As one of the most versatile and powerful hand-held signal generators on the market, the 1510A is a two-channel, battery-powered, microprocessor-controlled direct digital signal generator. It has an average battery life of 3 hours of continuous use. Weighing in at under two pounds, makes it ideal for use in the field.

There are many different ways this sophisticated device can be leveraged to perform precise test and calibration of equipment, wires, cables, sensors and much more.

Use Case #1 | Calibration of Balancing Equipment

The 1510A is uniquely designed to simulate all of the common types of vibration and speed sensors. The dual outputs of the 1510A can simulate a speed sensor, a vibration sensor, and the phase simultaneously. The 1510A output range is 0-100kHz, allowing it to simulate speed signals for large and small turbofan engines, APUs, turbochargers, pumps, compressors, and other rotating machinery. The 1510A can even simulate odd-tooth type tachometer signals that are commonly found in gas turbine engines and charge-mode sensors such as piezoelectric accelerometers.

Keeping rotating machinery properly balanced is important for the longevity of components and nearby equipment, safety, decreased noise, and reduced energy consumption. The dual-outputs of the 1510A combined with the precise phase control between the outputs make the 1510A a complete signal generation solution, often replacing two instruments or a much larger bench-top device.

The portability of the 1510A makes it possible to calibrate balancing equipment anywhere: power plant, flight-line, test cell, manufacturing facility, mine, or medical lab. In-situ calibrations can save vast amounts of money because equipment down time is greatly reduced. 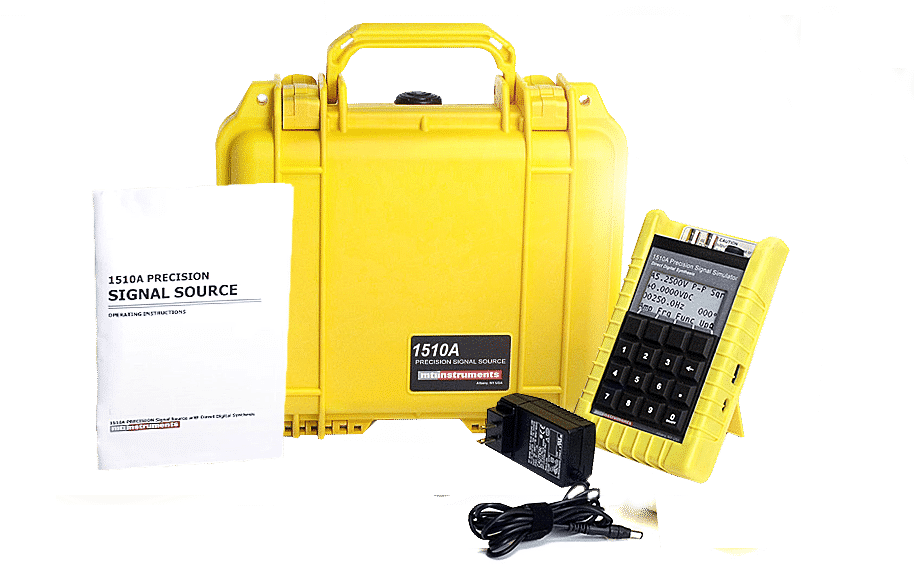 Download the Top 5 Uses as a shareable PDF, brochure, and datasheet

Condition Monitoring systems are typically composed for several sensors measuring a variety of process parameters for the purposes of recording system status and detecting developing faults. Common process parameters include vibration, rotational speed, flow, temperature, and strain. Condition monitoring systems must have all of their various input types periodically calibrated to maintain proper process control and safe operation of the equipment. Many Condition Monitoring systems must be calibrated after installation in order to account for losses due to cabling and other environmental factors.

The portability and durability of the 1510A make it an ideal device for in-field calibration. The 1510A can simulate all of the common types of sensors used to measure these parameters, including accelerometers, pressure transducers, microphones, speed sensors, temperature thermocouples, strain gages, EKG/EEG sensors, and eddy current probes.

The 1510A voltage outputs can be set to AC and DC voltages ranging from 0 to 10 volts with sub-millivolt accuracies. In bridge mode, the 1510A can achieve microvolt accuracies.   The flexibility of the 1510A allows it to replace several other portable calibration devices, greatly simplifying a technician’s toolkit. In-fact, for many Condition Monitoring systems, the 1510A may be the only tool required for calibration.

Use Case #3 | Calibration of Charge Amplifiers

The charge output from one of these transducers is typically converted to a low impedance voltage before transmission across cabling and into most common data acquisition and measurement equipment. This conversion is done by a device called a charge amplifier or charge converter.

The 1510A Handheld Signal Generator has been designed specifically for this purpose and can be used to simulate most types of piezoelectric accelerometers. The 1510A has both single-ended and differential charge output options. The differential charge output utilizes a 3-pin mil-spec circular connector. The single-ended output utilizes a coaxial microdot connector that is commonly used on accelerometers from Endevco, Kistler, and PCB Piezotronics.

An essential function of Condition Monitoring systems is often to trigger an alarm or trip a safety switch when unwanted or dangerous conditions are detected. These alarms must be routinely checked for proper operation.

The portability and durability of the 1510A make it an ideal device for in-situ testing of these alarms. The 1510 can be used to create gradually increasing/decreasing signals that can pass through the alarm condition, and thereby confirm that the prescribed alarms are triggered when they should be.

You can simulate sensors during system development, bring-up, and test.  Often during development of a new system or process, all of the conditions that a system is expected to operate under cannot be created on demand and instead must be simulated. The simulation is not only necessary to test for the proper connection of wiring and electronics, but also to test all of the functions implemented in software and/or other signal processing blocks in the system.  The 1510A can be used to generate signals that represent accelerometers, pressure transducers, microphones, speed sensors, temperature thermocouples, strain gages, EKG/EEG sensors, and eddy current probes.

For example, let’s look at speed signals.  A tachometer is an instrument that measures the rotational speed of a shaft, disk, or rotor. Common applications include automobiles, locomotives, and jet engines. The signals that a tachometer reads can be generated by a variety of transducer types, including optical, laser, magnetic, and eddy current.   Speed signals can be found as sinusoidal waves, square waves, and pulse trains. In some cases one cycle of a periodic waveform represents a single rotation of the rotor (called “once per rev”), but very often multiple cycles of a waveform can be produced in a single revolution as is the case with a gear-type tachometer generator. To further complicate the issue, some gear-type tachometers have a single “odd tooth” that represents the once-per-rev of the rotor. This once-per-rev signal is important for determining the angular position, or phase of the rotor. Tachometer instruments would need special circuitry or logic to detect this “odd-tooth”.

The 1510A has the capability to generate nearly all types of speed signals for the purpose of simulating speed pickup transducers and testing tachometer instrumentation.

In the simple case, testing cables only requires a quick continuity test between ends of the conductor. But most cabling is not simple; capacitive and inductive loading introduced by cable lengths, proximity to other conductive objects, and partially damaged cables and connectors can greatly complicate the testing.

The 1510A can be used to inject a known signal into wiring, allowing measurement equipment to confirm the cable integrity. More advanced applications of the 1510A use the frequency sweep function to establish a transfer function of a system, i.e. to identify how the system responds to all frequencies that it may be subjected to.